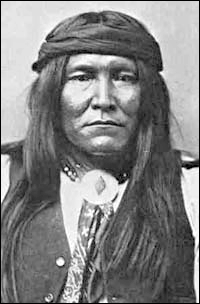 Cochise
Cochise was born about 1805 in an area that is now the northern Mexican region of Sonora, New Mexico and Arizona as a member of the Chokonen-Chiricahua Apache tribe.

Cochise grew to be about 5'10" tall and weighed about 175 pounds.    He was very strong and in his language his name was "Cheis" which meant "having the quality or strength of oak."

At first, Spain and later Mexico tried to take over the land where the Chokonen-Chiricahua lived.  The Chiricahua resisted the attempts and warfare broke out which the Apaches won most of the time.

The Mexican forces, with the help of American and Native American mercenaries, began to kill Apache civilians.  The father of Cochise was one of these victims.  This hardened Cochise against Mexicans and Americans and he resolved to get vengeance.

An Apache raiding party had driven away a local rancher's cattle and kidnapped his twelve-year-old son (Felix Ward, who later became known as Mickey Free). Cochise and his band were falsely accused of the incident (which had actually been perpetrated by Coyotero Apaches). An unsuspecting Cochise was invited to the Army's encampment by an inexperienced Army officer (Lt. George Bascom), who assumed that Cochise was responsible. Although the Apache leader truthfully maintained his innocence, and offered to look into the matter with other Apache groups, the young officer attempted to arrest him. Cochise jumped to his feet and immediately escaped by drawing a knife and slashing his way out of the tent. Cochise may have been shot as he fled. Bascom did succeed in capturing some of Cochise's relatives, who apparently were caught by surprise as Cochise escaped. Cochise eventually also took hostages to use in negotiations to free the other Indian hostages. However, the negotiations fell apart, mostly because of Bascom's intransigence, but also because the arrival of more U.S. troops made Cochise believe that the situation was spiraling out of his control. Both sides eventually killed all their remaining hostages, and the Apache leader went to Mexico while things cooled off. Cochise's brother and two of his nephews were among the hostages executed by Bascom, which served to further enrage the Apache leader and foment about 11 years of relentless warfare which left southern Arizona a mostly burned-out wasteland (in terms of white and Mexican civilization). The death toll may have reached as many as 5,000 settlers and travelers (many historians believe this number is an extreme exaggeration, that the toll was more likely a few hundred). The treachery of Lt. Bascom is still remembered by the Chiricahuas' descendants today -- they remember it as "Cut the Tent."

The Battle of Dragoon Springs

Cochise joined with his father-in-law Mangas Coloradas (Red Sleeves, Kan-da-zis Tlishishen), the powerful Chihenne-Chiricahua chief, in a long series of retaliatory skirmishes and raids on the white settlements and ranches. The Battle of Dragoon Springs was one of these engagements. During the raids, many people were killed on both sides, but the Apaches quite often had the upper hand, mostly because the United States was distracted by its own internal conflict -- the looming Civil War, and did not have the resources in the area to deal with the Apaches from any position of strength. Additionally, the Apaches' were highly adapted to living and fighting in the hostile and unforgiving terrain of the southwest.

At Apache Pass in 1862, Cochise and Mangas Coloradas, with around 500 fighters, held their ground against a New Mexico-bound force of California volunteers under General James Henry Carleton until caisson-mounted howitzer artillery fire was brought to bear on their positions in the rocks above.


Cochise Stronghold, Dragoon Mountains, southeastern Arizona.Following various skirmishes, Cochise and his men were gradually driven into the Dragoon Mountains but were nevertheless able to use the mountains for cover and as a base from which to continue attacks against the white settlements. Cochise managed to evade capture and continued his raids against white settlements and travelers until 1872. A treaty was finally negotiated by General Oliver O. Howard, with the help of Tom Jeffords who was Cochise's only white friend.

Cochise then retired to his new reservation, with his friend Jeffords as agent, where he died of natural causes (probably of abdominal cancer) in 1874. Cochise was buried in the rocks above one of his favorite camps in Arizona's Dragoon Mountains, now called Cochise Stronghold. Only his people and Tom Jeffords knew the exact location of his resting place, and they took the secret to their graves.

Cochise's descendants are said to currently reside at the Mescalero Apache Reservation, near Ruidoso New Mexico.

He married Dos-teh-seh, the daughter of Mangas Coloradas, in the 1830s. 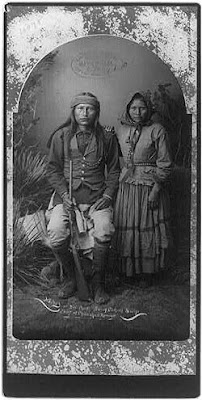 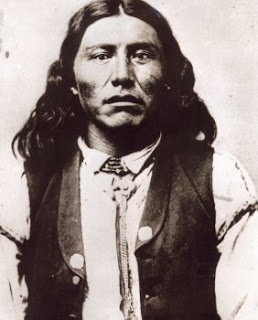 Cochise’s pedigree with children will appear. At this point you will be able to move around and see his ancestors and descendants. If you have trouble, contact your ward family history consultant.